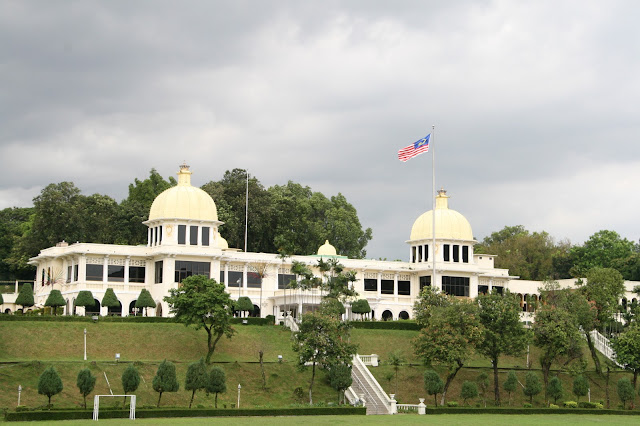 The Old Istana Negara or National Palace has now been transformed into the Royal Museum.

It was an interesting visit and it was nice to be able to see the inside of the Palace and even the bedrooms. Only 'complaint' was that you could only view the rooms from the doorway and not actually enter the rooms. So a lot of detail was not able to be appreciated. I'm sure there are reasons for this for example to preserve the rooms but it would have been nice to have been able to walk in. 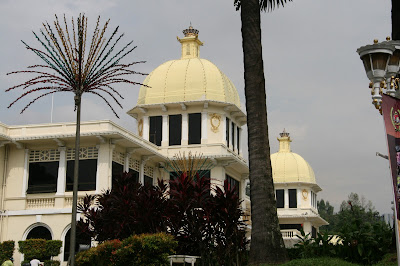 For example, the bathrooms look very opulent, but you were unable to see very much from just the doorway. There was also an onsite clinic with a dentists chair!

The palace was actually a lot smaller than I imagined it to be. 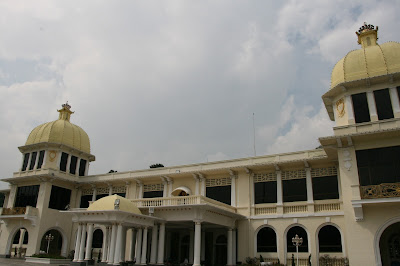 Sadly, there was also no writeup about the history of the palace, but I met a guide who was in the adjacent Balai Rong Seri who gave me a rundown on the history. Photography inside the palace is also not allowed although you can take photos in the Balai Rong Seri. 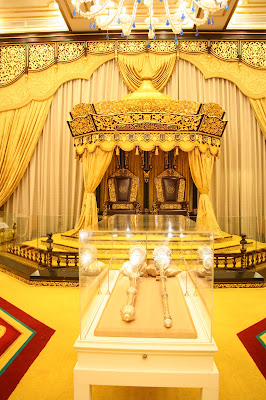 The picture above shows the Throne used for the Agong's Installation as well as the ceremonial maces in front of the throne.


The palace was originally the home of a local Chinese businessman. It was later taken over the by Japanese during WWII and then later the British used it as a military outpost and also a senior military officers mess.

When the Federation of Malaya was formed, the Selangor State Government rented the residence from the owners and it was used as the palace of the Sultan of Selangor.

The Federal Government bought it over from the owners In 1957 the building became the Istana Negara for the newly created post of Yang di-Pertuan Agong of Malaya.

In 1980, the Balai Rong Seri was built for the installation ceremony of the Yang di-Pertuan Agong which was the first time the Installation was held at Istana Negara. Before this, the Installation Ceremonies were held at the Tunku Abdul Rahman Hall in Jalan Ampang, what we now know as the MATIC Building.

So overall a very educational and interesting experience! Tickets are cheap at RM5 for Adults and RM 3 for school kids.
at June 29, 2017

The Old Istana Negara or National Palace has now been transformed into the Royal Museum. It was an interesting visit and it was nice to...

Dharm
A 40 something Malaysian from Kuala Lumpur, I'm a self confessed foodie that loves to cook and bake - especially for my two kids and my wife! Aside from cooking, I enjoy writing and have had a long, deep interest in photography. This blog is my attempt at combining my love of food with my interest in writing and photography while making my kids and wife happy with my culinary creations and at the same time sharing a little bit of Malaysia with the rest of the world!